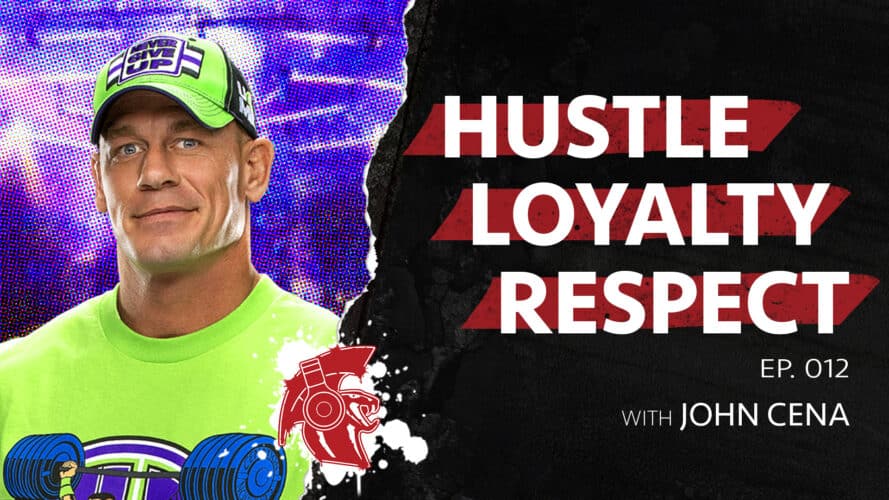 From Pink Slipper To Main Eventer

WWE Superstar John Cena remembers his very first Pay-Per-View main event at Blacklash 2003. Emanating from Worcester, Mass, the card featured the Doctor of Thuganomics versus the Beast Incarnate himself, former UFC champion Brock Lesnar. Not bad for John Cena who, 12 months prior, was on the brinks of getting released by the WWE.

Performing in front of a local crowd, the West Newbury, Mass native recalls being very nervous before his match. In fact, the event was the very first PPV his parents attended. Despite the lukewarm reception of some of the matches by the crowd, John Cena still thinks the overall PPV delivered.

“Don’t waste time and energy over the uncontrollable. Take what you have and make it something great.”

John Cena, who appeared on the Barbell Shrugged podcast, is known worldwide for his strong sense of ethics, promoting the values of hustle, loyalty and respect. As the Springfield College graduate proved throughout his illustrious career, hard work is the main key to success.

The Suicide Squad co-star actually started training at age 12, as a response to the bullying he was suffering from at school. Rapidly nourishing a passion for fitness and bodybuilding, John Cena eventually moved to the West Coast where he worked tirelessly at Gold Gym’s. The former 13-time WWE champion is adamant about the daily hustle and dedication needed for anyone to become successful.

The “E” Stands For “Entertainment”

As John Cena said during an appearance on the Howard Stern Show, he doesn’t mind “making an a$$” of himself. The SummerSlam 2021 main eventer lead by example many times when he diverged from the superhuman persona pro-wrestlers usually portray to embrace more comedic or entertaining storytelling.

Putting the Doctor of Thuganomics to the test, I challenged John Cena to a humorous quiz that you really gotta hear. First, I gave John a few rhyming non-sensical words to freestyle rap on… and the man totally owned it. I also tested his knowledge of old wrestling tag teams of the 80s, like High Energy and the Midnight Express. Yeah, we went “deep cuts”.

If there is one thing that John Cena’s peers agree on, it’s that he is a total workhorse. From granting a record-breaking number of wishes for the Make-A-Wish foundation, to representing WWE all around the world, to starring in Hollywood blockbusters (more recently, The Suicide Squad): John Cena exemplifies what hustling is.

For him, to hustle means giving yourself opportunities to fail, hence multiplying your chances at learning and improving. And that’s what an authentic leader does.

To be loyal is a value that was engrained in John Cena at an early age. Unfortunately a fleeting quality nowadays, John represents what devotion to a cause, to an organisation or to people is. Per example, when WWE expanded its developmental territory to Florida, he offered rookies free access to his private Hard Nock’s Gym in Tampa. For him, it was essential that prospective WWE wrestlers discover the benefits of strength and conditioning, for their body is their primary work tool.

For John Cena, respect is a way to stay humble. In fact, he makes it a personal goal to show proper respect to everyone, regardless of their opinions or values. I would add that your dictionary has the the most proper definition of what respect is, i.e. the “feeling of consideration towards someone, which leads to treat them with special consideration; manifestations of these regards”. Word Life.