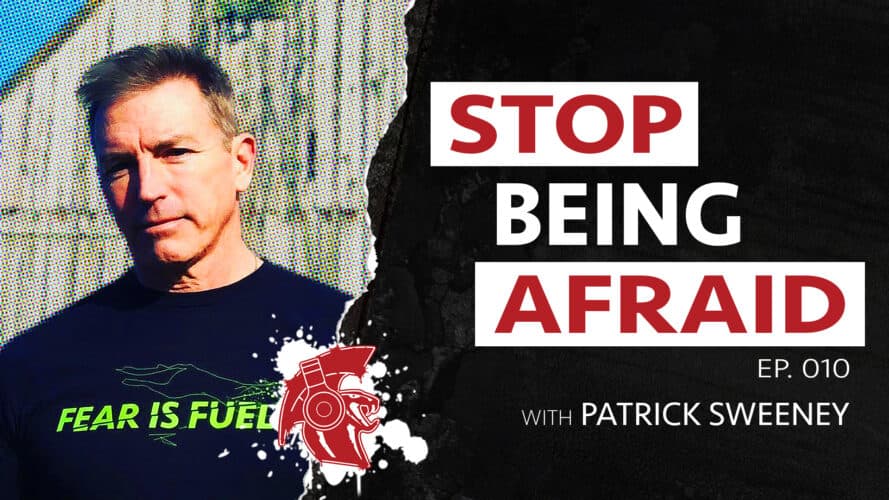 How To Turn Fear Into Fuel w/Patrick Sweeney | Ep. 010

Successful tech entrepreneur Patrick Sweeney remembers his difficult childhood: bullied and abused, Patrick grew a fearful kid. He vividly recalls a plane crash at Logan Airport (Boston, USA) that traumatized him. From that unfortunate moment on, Patrick developed fear of almost everything and tried to bury his shame through performance in sports and business

World Cup cyclist Patrick Sweeney looks back on his teenage years. Ashamed of his toxic relationship with fear, Patrick actually lied to his therapists, behaviour which led to a concealment of his genuine personality… for most of his life.

“On the other side of fear is where your dreams live. But most people are afraid to charge at that wall.”

– Patrick Sweeney, author of the “Fear Is Fuel” best-seller

Wall Street Journal best-selling author Patrick Sweeney confesses seeking to develop courage to overcome fear via competitive sports, business school and – ultimately – multiple profitable tech companies. As none of these means worked, the motivational speaker nicknamed “The Fear Guru” admits relying heavily on alcool and voluntarily burying himself in overwork to cope with his relentless anxiety.

Living an abusive lifestyle, Patrick’s focus was solely on growing his income and assets, to the detriment of his own family. However, his reality changed drastically when he got admitted to the John Hopkins Hospital emergency department, experiencing a strange pain in his left arm. After a series of tests, the University of New Hampshire graduate was diagnosed with a rare form of leukemia… and was asked by his doctor if his affairs were in order. At that moment, Patrick Sweeney promised himself that – if he were to win his battle with cancer – he’d face all of his fears, at last. And win, he fortunately did.

Honouring his promise, Patrick devoted himself to fatherhood and living a courageous life. The man who became the first cyclist to bike Mt. Elbrus, the highest mountain in Europe, flipped a switch and pro-actively confronted his greatest fears: as a means to vanquish his dreaded fear of flying, Patrick Sweeney actually got his pilot license.

Determined to help others overcoming their fears, Patrick consulted with tens of neuroscientists and CEOs, figuring out what fear really was and how to efficiently cope with it, whether it’d be the fear of starting a business, fear of failure or any other type of fear. He later shared his findings in his book “Fear Is Fuel”, so that we learn what fear can teach us. More importantly, Patrick’s wish is that we don’t have to go through a near-death experience before changing our lives and optimize our personal growth.

3 Tips To Overcome Your Fears

Listening to the Fear Guru, I agree that we do need more fear in our comfortable lives. Physically, when we get scared, our amygdala (or “lizard brain”) triggers our Fight or Flight survival response. Ensues a cocktail of physical and emotional reactions that might be detrimental to us. Exposing ourselves to fear regularly would allow our system to become accustomed to the responses and normalize how fear affects the brain.

Inspired by cancer survivor Patrick Sweeney’s words, I learned that it is wise to train oneself to emotionally retract from a stressful situation. To carefully observe and analyse grants us a rational perspective from which we can make a proper decision.

Listening to fellow Red Sox fan Patrick Sweeney ( Pah ! Pah Paaaaah !), I get that we either make decisions based on fear or opportunity. While fear-based decisions only produce regret, shame and failure, choices triggered by opportunity bring happiness, growth and fulfilment. In other words, to turn fear into fuel.

How To Use Fear As Fuel | TEDx

How To Get Into Creative Flow State w/Deftones | Ep. 022